“If Cuba is the key to the Gulf of Mexico, then this is the key to Santiago de Cuba,” asserts Gaspar, who lives on Cayo Granma, and swears that he has not crossed the narrows separating him from the city in many years. Gaspar thought it “was the end” when hurricane Sandy devastated the area in October 2012. During those early morning hours when waves reached thirty feet, forty homes were destroyed and two hundred experienced major damages. Gale force winds took their heaviest toll on this tiny bit of land, and the storm’s scars are still visible.

A team of students from the Martha Abreu Central University of Las Villas has been rewarded for its rescue plan for Cayo Granma during the London-based i-Rec Conference 2015: International Perspectives on Disaster Recovery and Reconstruction. But thousands of miles from England, the residents of the most famous island in Santiago Bay are trying to rebuild their lives three years after what seemed like a meteor impact.

The team is led by Professor Andrés Olivera Ranero, and includes students Ana Lourdes Barrera Cano, Royer Leno Medina, Elisa Medina Toboso, and Niuris Martín Rosabel, all of who hail from the provinces of Cienfuegos and Villa Clara. With the objective of the revitalization of the community, they presented their four-step plan, and were able to beat out over fifteen other projects competing for the award given in London.

The longboat that arrives once a day at Cayo Granma is noisy and leaves behind an odor of burning oil. Immediately after disembarking one is struck by the natural beauty of the place, and by the precarious life of its inhabitants. Cayo Smith, as Cayo Granma was originally called, is still a humble fishermen’s village, with wooden shacks that gave it its architectural uniqueness, and that used to house families of up to twenty members. The holes the winds left in the roofs and in the walls have been concealed with zinc slabs and pieces of wood collected after the storm.

“There’s not too much to do here,” explains Agustina, who lived through those years when most of the owners of Cayo Granma’s best homes left for exile, and the government turned the dwellings over to very poor people. “It was like a dream come true, but then everything got run down.” This lady confirms what specialists and sociologists have proven through their research: Cayo Granma’s economy is at a standstill, alcoholism rates among the youth are alarming, and unemployment figures are high.

Alcoholism rates among the youth are alarming, and unemployment figures are high

“There’s only one school here that goes up to the sixth grade, and a lot of the adolescents drop out because it’s too hard getting to the other side,” explains Agustina as she points to Santiago de Cuba. Some of the villagers have their own dangerous and fragile rowboats. When they use them, they do so very quietly since most of them are not authorized and therefore are subject to frequent confiscations. When talking abut the unreliable schedule of the only means of transportation connecting them to the city, Agustina complains: “There’re days we’re not sure if the government’s longboat is coming, or at what time.”

The architecture students have proposed a first phase that would guarantee a decent home with a roof for each family living on the key. Only after this is accomplished, the second phase of the project would start with the building of a manufacturing plant and a sawmill in order to create employment in an area with a high percentage of people without ties to the labor force.

The initiative’s third step would focus on urban and economic development. The models were shown to the judges, who gave the award to the proposal showing a lovely place, with flowers and abundant gardens, where residents build their own boats and semi-attached homes. “A picturesque, resilient, sustainable, and dignified habitat,” are some of the words used to describe the community that will ensue after the project is executed. The fourth stage would be the consolidation and preservation of what has been accomplished. However reality is far from this panacea.

With strong winds powerfully whipping the shoreline, 72-year old Carlos Cesario passes by with a bag hanging from his shoulder. “Very few homes have been repaired,” he states, while explaining how he shares a dilapidated house with fifteen relatives. This problem is common among the key’s residents, and they stare blankly out towards the horizon without the slightest hope that solutions will come through official channels.

When Cayo Granma’s residents were shown the winning models from the London competition, some could not contain their laughter, while others asked “And when is it supposed to happen?”

“It’s an awful situation,” protests Moraima Fernández. “My roof caved in, my house fell apart, and I couldn’t find zinc slabs.” Mrs. Fernández points out that the local authorities’ poor handling of the situation has contributed to “after three years, everything still being more or less the same.”

When Cayo Granma’s residents were shown the winning models from the London competition, some could not contain their laughter, while others asked “And when is it supposed to happen?” The project’s timetable and date for the completion of the homes have yet to be determined. There is not even a budget yet to start on the first phase. “I’m sure that they’ll have to wait for some foreign organization to fall in love with the idea, ones that will want to finance it,” reflected Ana Laura, a young lady born on Cayo Granma. Nowadays “I only come here to visit my grandmother, because this place is like death,” she added.

Far from here, on a few restless architects’ drawing boards, rest the plans for Cayo Granma’s future, a faraway, utopian place that the island’s current residents do not even want to think about. 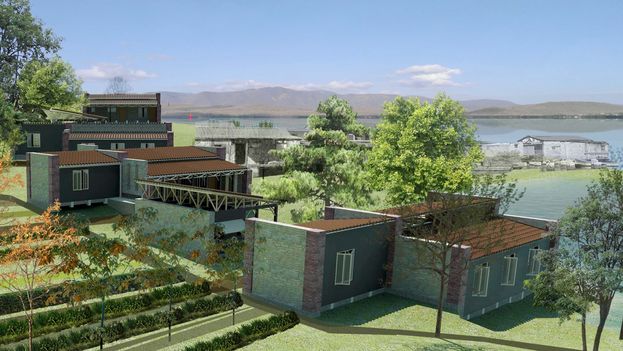 The projected future of Cayo Granma as it appears in one of the award-winning models presented in London.