1898: the United States declares war on Spain after accusing it of the sinking of the battleship “Maine” in Havana harbor. The United States wins and Spain has to give up Cuba. 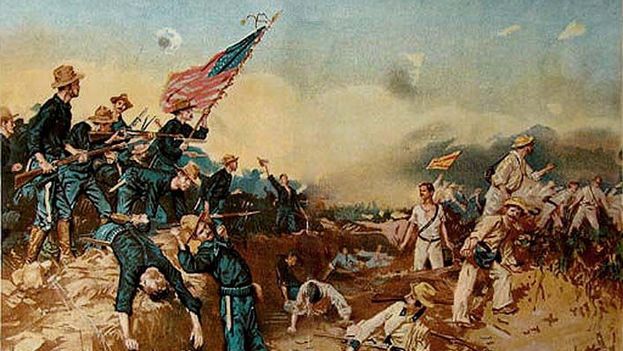 1. Ground invasion during the war between the US and Spain

1901: On June 12, the United States imposes the Platt Amendment which will be incorporated into the first Constitution of Cuba and limits the sovereignty of the nascent republic.

1902: The island is proclaimed an independent republic under President Tomas Estrada Palma, but remains under the tutelage of Washington. 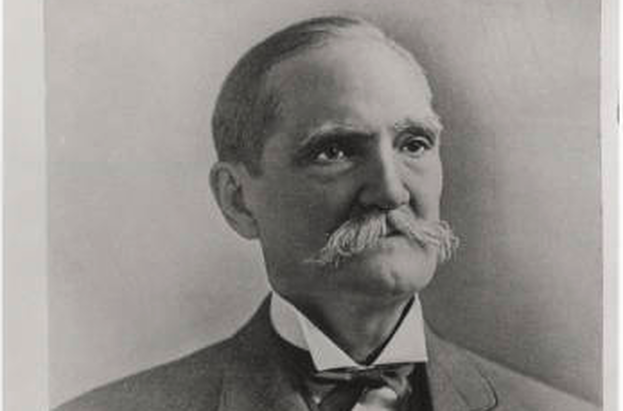 2. Tomas Estrada Palma, the first president after the independence of Cuba. (University of Miami)

1903: Estrada Palma and the US President Theodore Roosevelt sign the Cuban-American Treaty, which includes a lease of the naval base in Guantanamo, in perpetuity. 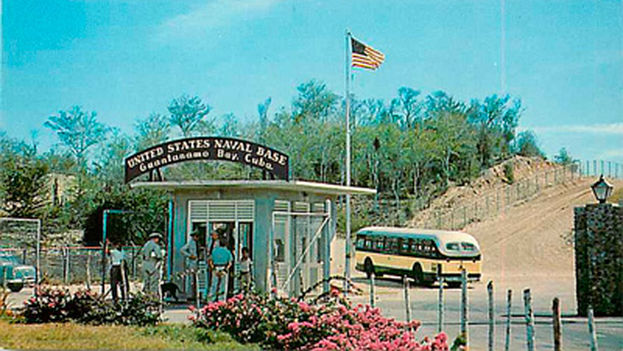 1912: US forces return to Cuba to squelch the protests of the Black community against racial discrimination.

1928: Official Visit to Cuba of Calvin Coolidge, the last of a US president. He received the then president of Cuba, General Gerardo Machado. 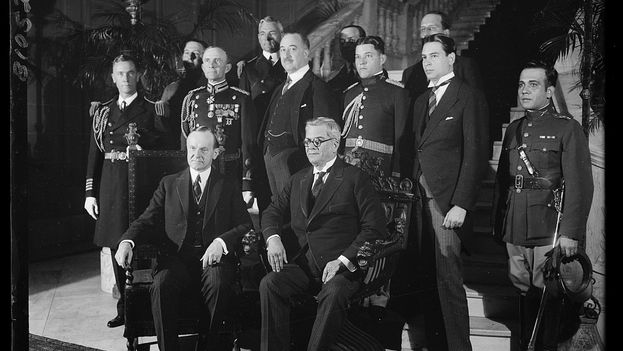 4. Coolidge with President Machado at the Embassy of Cuba in Washington in 1927. (Library of Congress)

1933: President Machado is overthrown by a coup.

1934:  Washington waives the right to intervene in Cuba’s internal affairs (the Platt Amendment, imposed on Cuba in 1901, is repealed) and establishes a quota for sugar exports from the island to the US. 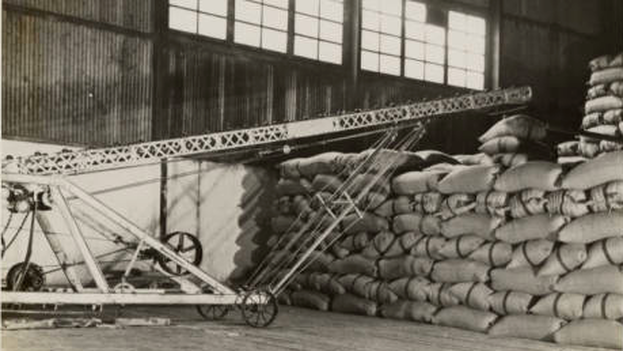 1945: On March 9 Edward R. Stettinius is the last US secretary of state to set foot on Cuba on official business.

1955: In February, US Vice President, Republican Richard Nixon, makes an official visit to Cuba three weeks before the inauguration of Fulgencio Batista. 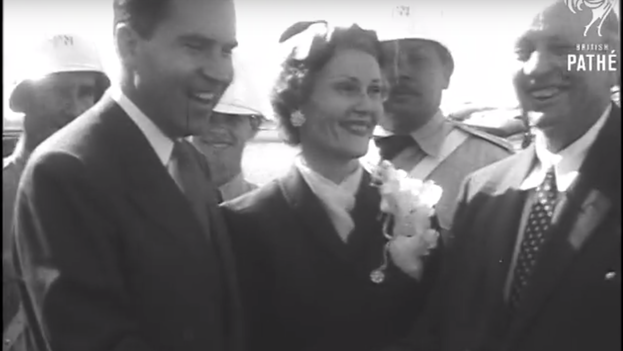 6. Nixon with his wife during his visit to Cuba. (Video Capture Archive British Pathé)

1956: 82 men, including Fidel Castro and Ernesto “Che” Guevara, leave Mexico to Cuba aboard the yacht Granma purchased from a US company. The go into the Sierra Maestra to organize a guerrilla effort. 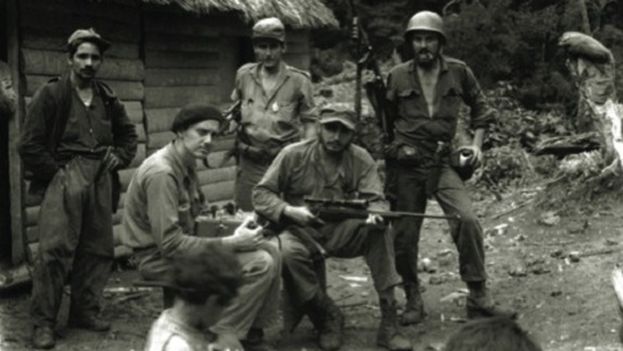 1958: In March the US withdraws military aid to Batista. In June Fidel Castro sends a letter to Celia Sanchez where he tells his “destiny” will lead to a “long and great” war against US. 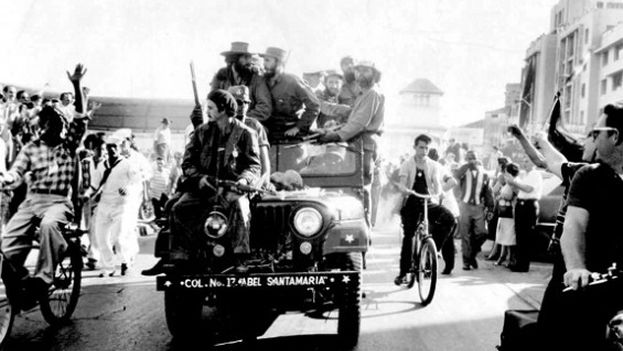 April 1959: Castro meets with US Vice President Richard Nixon in an unofficial meeting in Washington. Nixon later writes that the US had no choice but to try to “orient” the leftist leader toward the “right direction.”

1960: Cuba nationalizes US companies without compensation. US breaks diplomatic relations with Cuba, cancels the sugar quota and establishes an economic embargo on the island, still in force.

April 1961: Cuban exiles fail in their attempt to invade Cuba at the Bay of Pigs (known as Playa Girón in Cuba) with the support of the US.

1961: Castro proclaims the socialist character of Cuba and confirmed its alliance with the USSR. 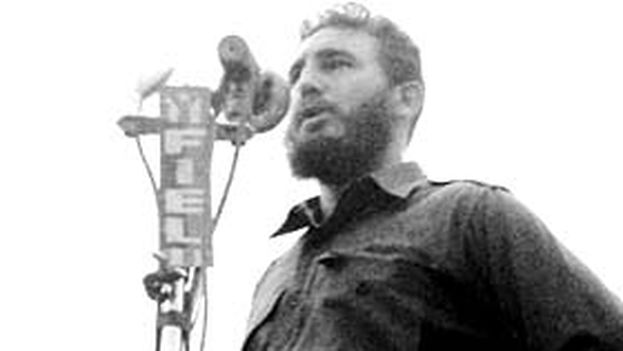 9. Fidel proclaimed the socialist character of the Revolution on April 16, 1961 (Humberto Michelena)

October 1962: President Kennedy denounces the presence of Soviet missiles in Cuba. After 13 days of tension, Moscow agrees to withdraw its 42 missiles in exchange for a US commitment not to invade the island. 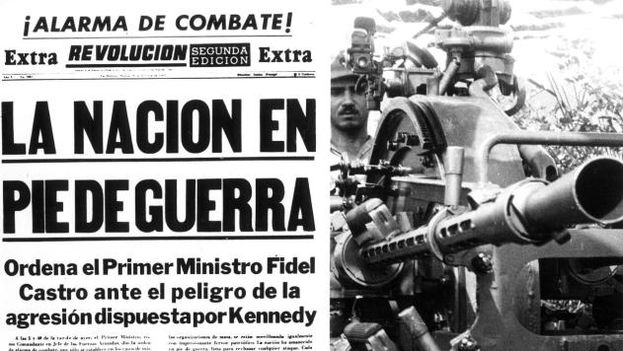 10. The missile crisis referred to in the official Cuban press

1965: The “sea bridge” begins from Camarioca, Matanzas, to be followed by the “freedom flights,” which allow the exodus of some 260,000 Cubans to the US.

1966: US approves the Cuban Adjustment Act, known as “dry foot / wet foot”. Any Cuban who places a foot on American soil is allowed to stay, any Cuban intercepted at sea is returned to the island.

1977: Under President Jimmy Carter both countries establish “Interests Sections” in the other. The building has remained under diplomatic protection afforded by Switzerland since 1961.

April 1980: Mariel boatlift. After a diplomatic crisis with Peru — sparked by Cubans claiming, and being given, in Peru’s embassy in Havana — Fidel Castro allows exiles in Miami to come in a flotilla of boats to pick up their relatives at the Port of Mariel. Some 125,000 Cubans wishing to leave the country come to the US in this way. 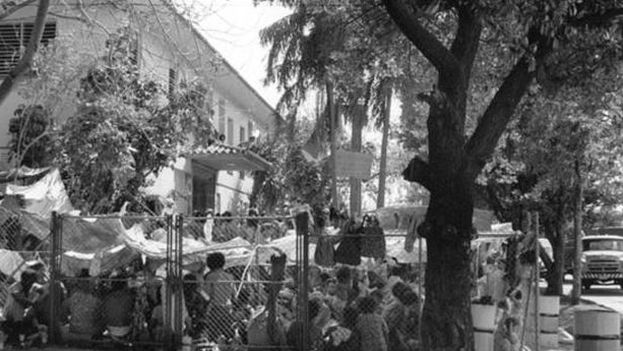 11. The April 1, 1980 a crowded bus Cuban drove through the fence of the Peruvian embassy in Havana, and the drive and passengers sought asylum to leave the island. The embassy refused to let them leave the embassy and on April 4 the Government of Fidel Castro decided withdraw military protection from the place.

1985: The US government creates Radio Marti to break the monopoly and the Cuban state censorship on news and information on the Island

1990: With the implosion of the Soviet empire, Cuba loses the huge subsidies from Moscow and establishes what it calls the “Special Period In the Time of Peace,” marked by widespread shortages

1994: As a result of the “rafter crisis”, Havana and Washington sign an agreement on immigration: The US will accept 20,000 Cubans each year and the island promises to control the exodus of migrants. 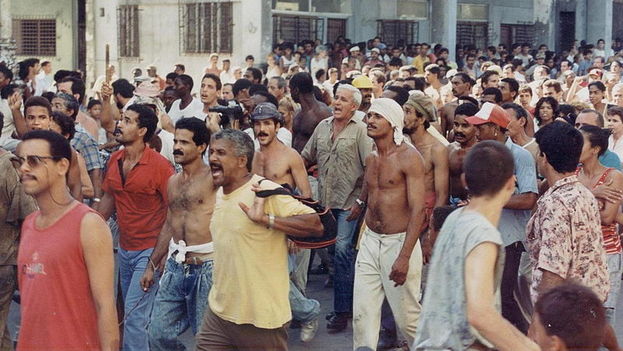 February 1996: The Cuban Air Force shoots down two US civilian planes of Brothers to the Rescue, an organization of Cuban exiles who are dedicated to saving the rafters in the Florida Straits. Four crewmen die. In response, the US Congress enacts the Helms-Burton Act, which tightens the embargo.

1998: The Clinton administation allows the sale of some food and agricultural products to Cuba. 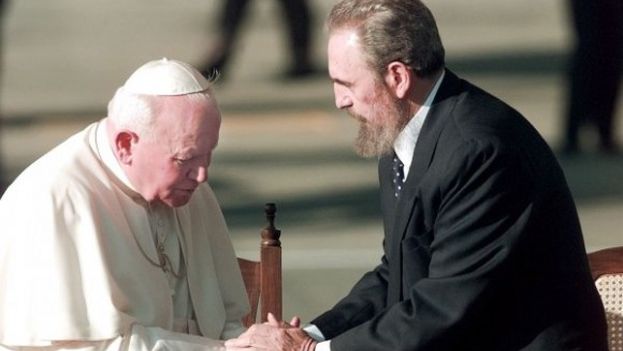 13. Fidel Castro during the visit of Pope John Paul II to Cuba in 1998. (Cubadebate)

June 2000: The Cuban exile loses the battle for custody of Elian Gonzalez, who arrived the previous year off the coast of Florida on the same raft in which his mother, stepfather and several others died in their attempt to reach the USA. Elian is returned to his father in Cuba. 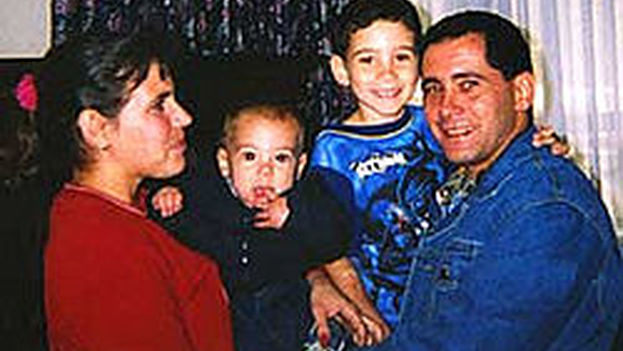 14. Elián González reunited with his father and family members at Andrews military base. (CC)

June 2001: Five Cubans detained in Miami received long sentences for spying for Havana. The case of “The Five” becomes a new rallying cry for the government in Havana. 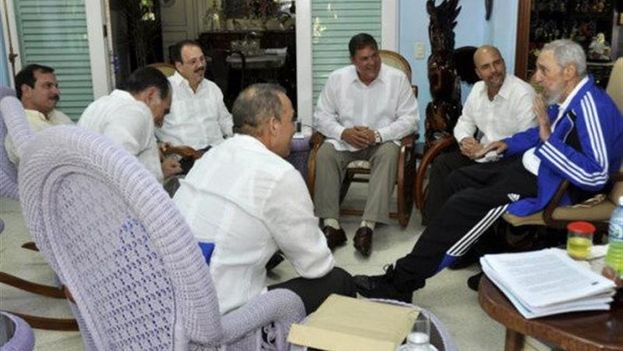 15. Fidel Castro with The Five, on 28 February in Havana. (EFE / Revolution / Cubadebate Studies)

May 2002: The Bush administration accuses the government of Cuba of developing biological weapons and adds the island to the group of countries that Washington calls the “axis of evil.” Former President Jimmy Carter, on a goodwill trip, visits several scientific centers in Havana. It is the first trip by a US former president to the island since 1959.

July 31, 2006: Fidel Castro is ill and provisionally delegates his functions to his brother Raul.

July 2007: Raul Castro demonstrates openness to talks with Washington to improve relations, but only after the US presidential elections of 2008.

February 2008: Raul Castro officially assumes power as president. Washington claims that the embargo will remain until the holding of free and fair elections.

December 2009: The US contractor Alan Gross is accused of espionage and sentenced to 15 years in prison in Cuba for having brought into the country equipment for satellite transmission, which is banned in Cuba. 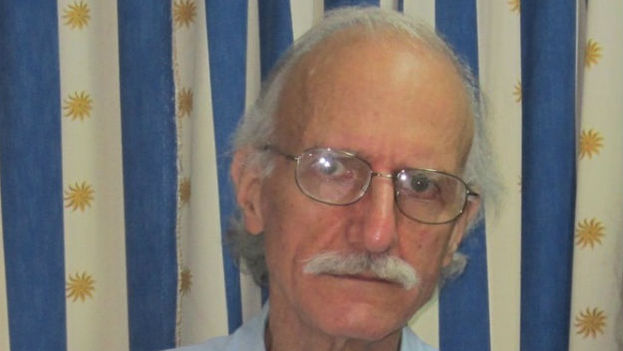 October 2011: The US releases the Cuban agent Rene Gonzalez, one the group of “The Five.”

December 2011: The US again demands the release of Gross, but Cuba refuses. 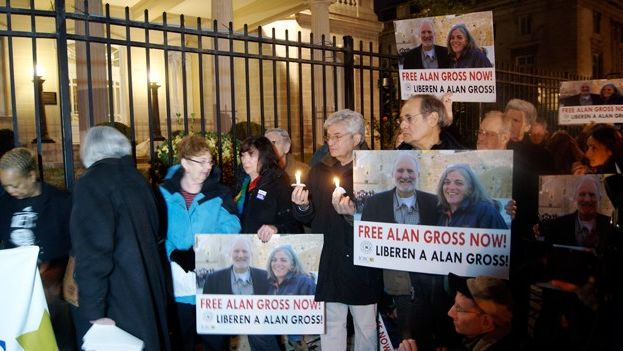 17. Demonstration calling for the release of Alan Gross 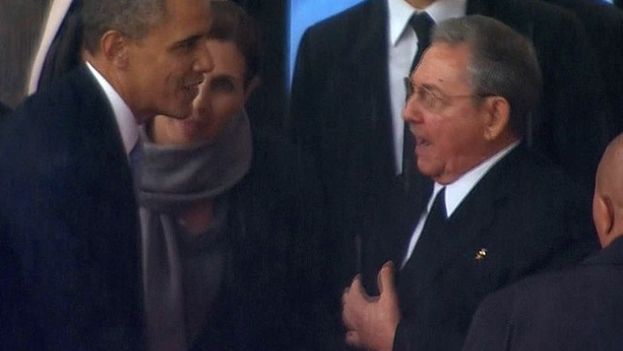 18. Raul Castro and Barack Obama greet each other for the first time at the events of the funeral of Nelson Mandela in South Africa

February 2014: Several surveys show that most Americans favor the restoration of diplomatic relations with Cuba.

December 17, 2014: Alan Gross lands in the US. In speeches on TV, the presidents Barack Obama and Raul Castro announce the start of the normalization of relations between the two countries. 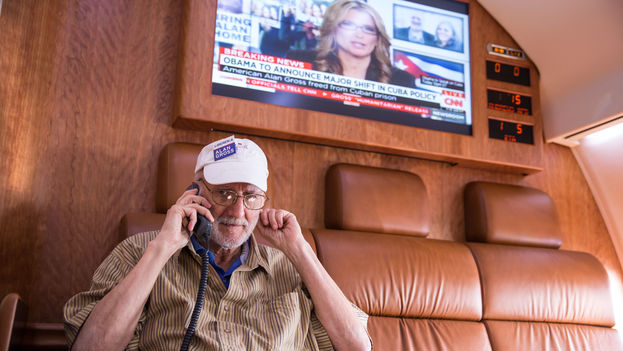 19. Alan Gross in his flight back to the US after being released last December. (CC)

January 2015: The White House softens the regulations on travel to Cuba and introduces other measures to facilitate, for example, the work of telecommunications providers and financial institutions.

April 2015: Barack Obama and Raul Castro dialogue at the Summit of the Americas in Panama. Soon after, at the request of Obama, Congress removes Cuba from the list of state sponsors of terrorism, on which it had been since 1982. 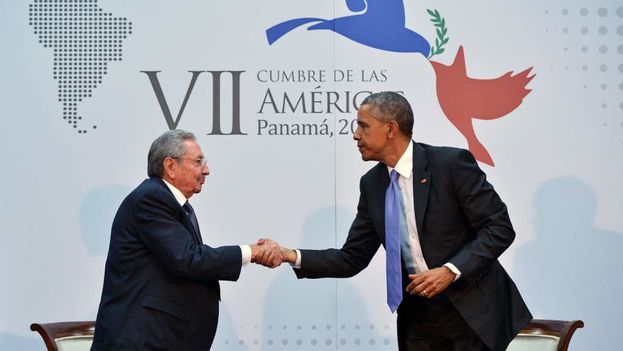 20. Raul Castro with Barack Obama at a press conference at the Summit of the Americas

July 20, 2015: The Cuban embassy in Washington and the US embassy in Havana are reopened. Cuban Foreign Minister Bruno Rodriguez, travels to Washington for the ceremony of hoisting the flag. 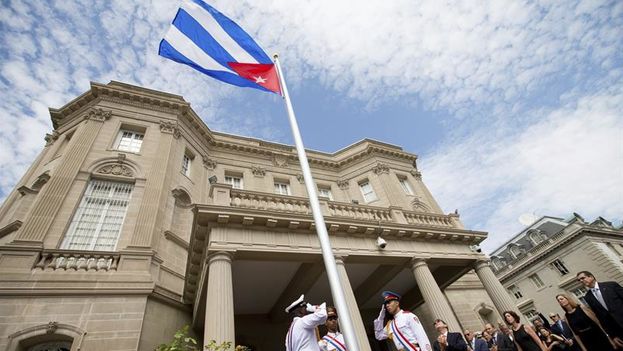 July 27, 2015: The United States removed Cuba from its list of countries not doing enough to combat human trafficking, which includes Venezuela, Russia, Iran, Syria and North Korea, among others

August 14, 2015: Secretary of State of the United States, John Kerry, travels to Havana for the raising of the American flag at the embassy. 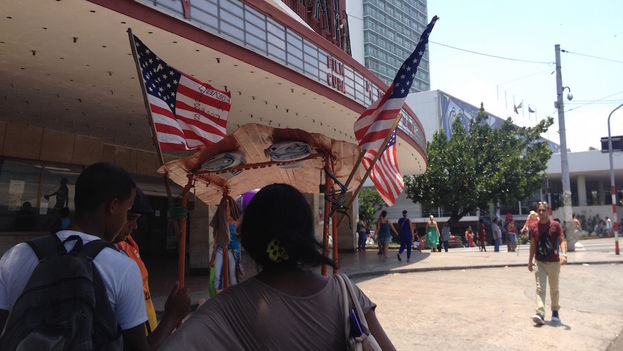 22. Cuba and the United States, at odds for more than half a century after the triumph of Castro’s revolution, today inaugurated a new era with the restoration of diplomatic relations, broken in 1961