Hundreds of Cubans, on Friday, demonstrated their dissatisfaction with  Quito’s decision to require visas from he island’s nationals as of Tuesday, December 1.

The embassy, located in the Miramar neighborhood, is currently cordoned off by a strong police operation preventing anyone from approaching. The agents assert that “last night several people tried to sneak into the embassy,” although the majority of those congregating on the corners were talking about the unreliability of the official version.

Many people are also gathered in front of the offices of the airlines that fly to Ecuador, to demand or change tickets. At the office of Copa Airlines in Miramar, people continued to gather despite an employee advising them, an hour ago, that there are no more tickets for Ecuador until April Some have stayed, despite the warning, hoping to be refunded the price of their ticket. 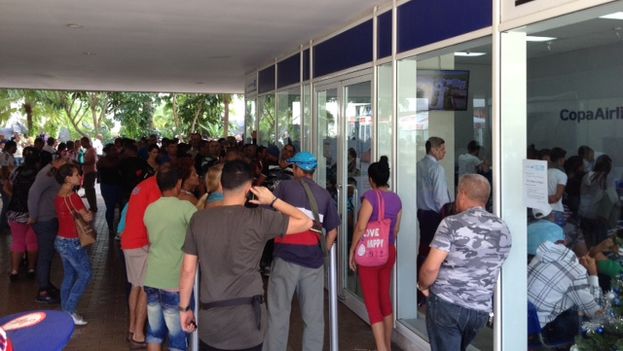 The Ecuadorian consul in Cuba, Soraya Encalada, took to the streets with other diplomats to explain that her government’s position is not to “obstruct” travel, but to “prevent human trafficking,” according to the press agency EFE. The diplomat said that the decision to require visas from Cubans was a “temporary situation,” which required everyone interested in traveling to Ecuador to enter their data into the embassy’s website in a “simplified” procedure to speed up the paperwork.

For years, Cubans who want to reach the United States have flown to Ecuador because it did not require a visa. The migrants would then continue their journey through seven countries (Colombia, Panama, Costa Rica, Nicaragua, Honduras, Guatemala and Mexico), facing many difficulties and dangers on the way.