The morning was warm and the Nazareht neighborhood had been listening for days to the distinctive Cuban accent. This point in the geography of Liberia, capital of Costa Rica’s Guanacaste province, is now one of the places where dozens of our Cuban compatriots are waiting to continue their journey to the United States.

At least 70 of them are housed in the premises of the Bethel Assembly of God Church. This newspaper spoke with Gerardo Obando, Costa Rican and pastor of the congregation, who detailed the current situation of the migrants in his care.

Escobar. Have you had any previous experience with migrants?

Pastor Obando. This is the first time that we have had this kind of emergency. When we were contacted by the authorities of the National Emergency Commission (CNE) we didn’t hesitate to say yes, to be able to help our Cuban brothers. My wife and I came from a tour of Nicaragua two Sundays ago and we couldn’t cross because the border was closed. We had to stay one more day on that side and it really bothered us, we were very sorry for the Cubans.

Especially thinking that there were children, older people, and because it was raining at the time. We were there, praying for them and it was a surprise when we arrived here the same Monday and the CNE coordinator contacted us to ask if we would lend our facilities.

Escobar. Is it a solitary task or are you being supported?

Pastor Obando. Several independent organizations and government institutions are involved, such as the Red Cross, the National Children’s Trust, the Lions Club and the national Ombudsman, among others. They have all been hand in hand here with us.

Escobar. Has there been any rejection by nearby residents to the arrival of so many Cubans?

Pastor Obando. People living here have reacted in a very humane way, there has been no opposition. They have been lending a hand, bringing any kind of assistance that may be needed here. Even some who do not come to the church have baked bread and brought it and milk for the Cubans.

Escobar. Are the migrants are being held here?

Pastor Obando. They are not prisoners here. They have complete freedom and can come and go. We only have a time when we close the gates, for reasons of security. On the other hand, they have visas and Immigration came yesterday and extended their visas for 15 days.

Escobar. Nicaragua officials have hinted that these people are criminals. Have there been violent incidents in the shelter?

Pastor Obando. We have not had any incidents. There is harmony and they are very nice people, well educated and very helpful. They have collaborated with us in fixing some things around the building, they are eager to work. 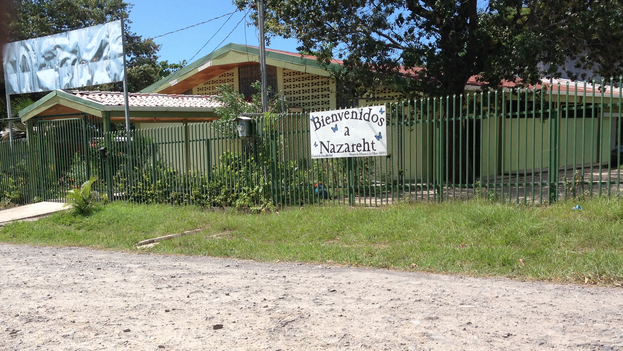 Nazareht shelter in Liberia, Costa Rica, home to some of the thousands of Cubans stranded in the country.(Reinaldo Escobar / 14ymedio)

Escobar. Do they participate in church services?

Pastor Obando. Yes, many are participating. We are also praying for them that they may continue their journey to the United States.

Escobar. What have you heard them say they wish for most?

Pastor Obando. The biggest dream of all of them is to reach freedom. Many of them have dreamt since childhood of a freedom they have not had.