The British composer and guitarist Dominic Miller said Wednesday that he hopes to perform in Cuba with Sting. “I want to do it before Mick Jagger does it,” he said at a press conference held at the Cuban Art Factory (FAC) in Havana, “because it’s a race and I want us to be the first to do something great here.”

Miller will give a concert this Thursday at the Cuban Art Factory with Manolito Simonet y su Trabuco, They will perform songs from the CD Made in Cuba, what both musicians recorded in Cuba and Tenerife. The CD, almost entirely instrumental, will be launched for the first time this week on the island. Miller said that next March he will also promote the album in Europe.

In his press conference, Simonet invited the members of the family of  X Alfonso, lead manager of FAC, to “work together on a theme for the closing,” of the concert in Havana. The Cuban guitarist Ernesto Blanco and his brother David have also been invited, although the latter regretted that he cannot participate because of prior commitments.

The concert is part of British Culture Week, which started last Sunday in the Cuban capital. Initially, pianist Mike Lindup, member of the band Level 42, was expected to participate but he failed to arrive in time for the show.

Highlights of Miller’s musical career include, among many other moments, accompanying Sting in numerous performances and recordings. Asked about a possible visit by the former member of The Police, the guitarist said, “He came here once a few years ago,” and he was “very jealous because I had come before him.” He defined him as an “older brother” and said that he is trying to persuade him to come here with his production.

During the press conference this musician that Sting called his “right hand and left hand,” commented that accompanying Simonet and his orchestra hadn’t been complicated because “music is a language” and “there weren’t any problems when it was time to get down to work.” He said that three years ago he had the chance to work with Simonet in Germany and “from the first second there was a musical connection.” 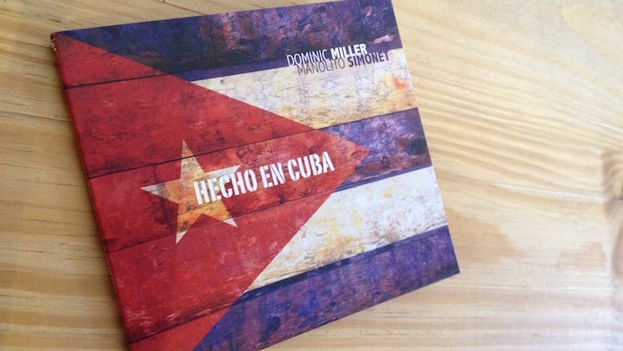 The cover of the Miller and Simonet CD. (14ymedio)

Meanwhile, the director of Trabuco said that in the recording of  Made in Cuba all the musicians from the Cuban orchestra participated. Both musicians thanks the FAC for giving them the chance to perform in one of its rooms and Miller added that it is “the ideal place” because it is “a house of fusion and new ways.”

Miller is originally from Argentina and began his career in the mis-eighties. He appeared with World Party and King Swamp and later participated in the album  … But Seriously by Phil Collins. In the early nineties, he accompanied Sting in his albums and concerts, and shared with him the responsibility of memorable songs such as  Shape of My Heart. His solo work began in 1995 with the album  First Touch, and to date he has already released 10 albums, all instrumental.