Spending her days among needles, threads and fabrics, the dressmaker Yansa Muniz defends handmade garments against the widespread trend to prefer brand name clothes. Her tenacity has led to the creation of  Impar (Unparalleled), a workshop in Havana’s Nuevo Vedado neighborhood, where she dedicates herself to made-to-measure outfits.

In a society where tailors and seamstresses are an endangered species, this young woman learned the craft from her grandmother, an expert in hats for the theater. However, it was only a few years ago that she realized she wanted to devote the rest of her life to those skills learned in childhood.

Yansa acquired her own self-employment license in 2013, when the authorities outlawed the sale of imported clothing. “I sewed a tea towel and they gave me permission,” she says, recalling the sewing exam she had to take before the inspectors of the Ministry of Labor to demonstrate her skills.

Now, much later, her biggest concern is finding the raw materials to support her business, amid the shortages and high prices in the Cuban market.

Most of her customers are women between 40 and 50, who find it hard to find clothes in their size at the state stores. Also common are those who come to ask her to repair or alter some garment; she rarely provides services to teenagers because they “prefer brand name clothing,” says the dressmaker.

In August, the greatest demand is for repairing and altering school uniforms, often “we have to take them apart and start from the beginning,” says Yansa. She works with two machines, an electric Singer and a German Gritzner, which lets her do finishes such as scallops similar to industrial machines, and she feels herself lucky compared to others who use unpowered machines “and have to work the pedal the whole time.” 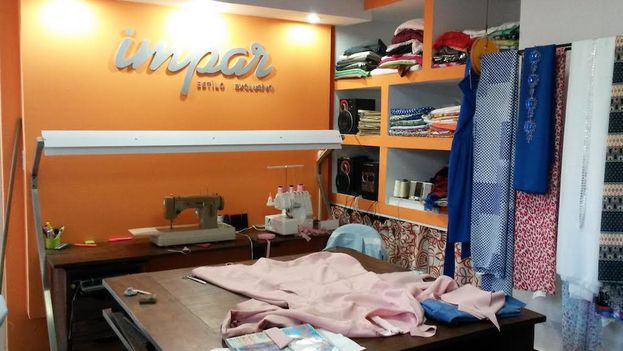 The informal (underground) market in fabric is not as well developed as that for already-made clothing. Bringing resources from another country is not a solution because right now the government only allows the import of ten yards of fabric. “If they have one yard more we seize the entire shipment,” confirms an official with the Public Services Department of the General Customs of the Republic.

Some seamstresses are worshipped for their skill. This is true in the case of Elvira Menendez, 78, who boasts that she can still “sew up a storm” and has the vision to “thread a needle on the first try.” She lives in Regla and has made clothes ranging from layettes to wedding dresses for many generations of the residents in her area.

The most successful outfit from this seamstress was a copy of the jacket Michael Jackson wore in one of his videos. “People came from all over Havana to buy it,” she recalls. She was also an expert in plagiarizing jeans, at a time when they were only available to those with relatives abroad.

Now, when she talks about fashion, her eyes light up and she remembers the works of dressmaking shops such as La Época, Fin de Siglo, Belinda Modas and Angelita’s Novias. “The seamstresses there followed the trends from Paris and New York,” she said. After the crisis of the ‘60s “people were looking in their closets for old fabrics that could be reused to sew something new.”

Her worst nightmare came true in the decades of the ‘70s and ‘80s, “when you saw the same patterned fabric in a man’s shirt or in a woman’s dress,” she jokes. Her market niche now is clothes for children who are taking ballet or Spanish dancing classes, the clothing for Santeria rituals, and uniforms for sports teams and for employees of private restaurants.

Elvira recognizes that the importing of clothes from Panama and Ecuador is “putting an end to this profession.” She can’t compete with the “catalogs of brand name clothing from there,” she comments, referring to the underground market in clothes. While she talks, she sews a robe for a little girl, with ruffles and covered buttons. “This is something you see less and less of,” says the veteran seamstress.