Broken tombstones, open graves, dilapidated tombs, and, here and there, scavengers that devour shallowly buried remains. This is no scene from a horror movie, but images from a video that expose the serious situation in the Mayabe Cemetery in Holguin.

Released by the Patriotic Union of Cuba (UNPACU) in 2014, the film was produced by journalists Nairovis Zaldivar, Yainiel Diamela Escofet and Rosaida Check, and has been distributed through the illegal “ weekly packet” that circulates widely in the province without any official media picking up the story.

Almost a year later, the problem has not been solved; it was caused because the Vladimir Ilich Lenin University General Hospital, the Lucia Iniguez Landin Surgical Teaching Clinic and the Provincial Military Hospital bury their wastes in the place, since their crematoriums are not functioning. Criticism of the mismanagement of biological wastes has been heard at various levels but local authorities have not taken action in the matter.

Investigative work discovered the errors committed by the medical institutions, including depositing the remains from surgeries, abortions, amputations and tests, all without following the proper precautions. For months, those who have visited the grave of a relative in the cemetery have been overwhelmed by carrion birds and other animals that helped themselves to the hospital wastes barely covered by a little dirt. 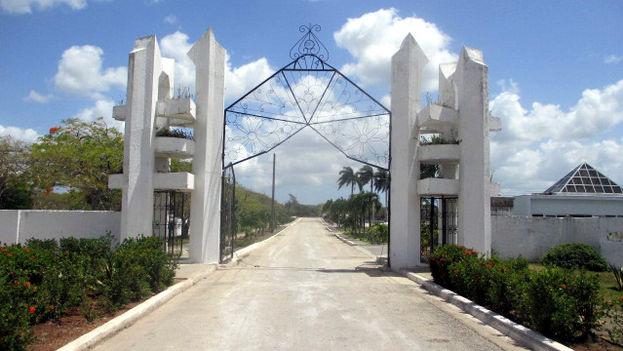 Gate to the Mayabe, Holguin, graveyard, one of the biggest on the island. (14ymedio)

Located six kilometers from the city, the Holguin cemetery has some 500,000 square meters and is one of the biggest in the country. Although there are no homes nearby, at midday the bad odor is unbearable, especially in the area at the back of the site where the three medical centers dump their wastes.

On the Cuban Medicine Blog, Doctor Eloy A. Gonzalez calls attention to the fact that “the management of hospital wastes, biological materials above all, is a problem of the highest priority for health systems and the organizations and institutions charged with management and disposal of the same.”

The doctor points out that “you cannot walk around in cemeteries throwing away biological wastes, barely buried where soon stray dogs and carrion birds notice the anatomical parts that come from a hospital. Are there no incinerators in hospitals in Cuba?” he asks. His text circulates through the email of various health professional with accounts on the Infomed service.

With the scandal uncovered by the UNPACU video, now the wastes are buried more deeply, although still without regard to the measures required for their handling.

Specialists consulted by this blog agree that a first step to solving the problem would be to diminish the biological wastes that the hospitals generate as much as possible. Once reduced, their collection, transport and disposal must be rigorously controlled. Failure to fulfill the measures associated with the treatment of these wastes can present a serious health risk.

With the scandal uncovered by the UNPACU video, now the wastes are buried more deeply, although still without regard to the measures required for their handling. The regular edition of the February 15, 1999, Official Gazette governs the responsibility of “the heads of the entities that are in charge of installations and release areas whose operations generate dangerous biological wastes.” 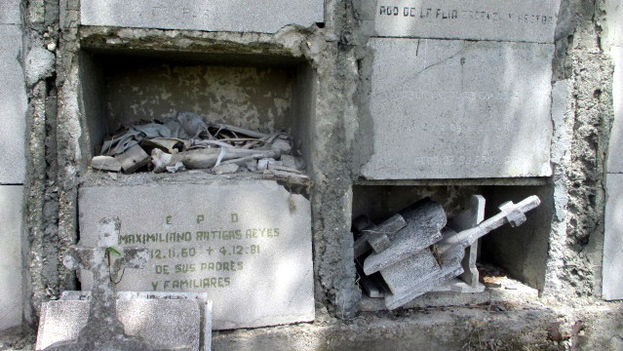 Exposed remains in the neglected niches of Mayabe. (14ymedio)

Under Cuban law, wastes that may contain “biological agents, organisms and fragments of agents or organisms with genetic information, that represent a real or potential danger for human health and the environment in general” must be removed in a way that “guarantees the protection of the environment and in particular the population and workers.”

On questioning about the topic at the Vladimir Ilich Lenin University General Hospital, the employees shy away from responding about the conditions in which the wastes from the health center end up at the Holguin graveyard. Only one employee from the laboratory area, who preferred anonymity, submits: “We have problems with resources, for example with the correct bags and containers for placing the samples that we process.”

When they will repair the crematorium is a question that finds no answer in the management of the health center and much less in its administration. Nevertheless, the epidemiological risk from the wastes is not the only cause for worry for those Holguin residents who visit the cemetery. The use of an area laden with funereal connotations as a biological dumping ground bothers many, too.

Lucia Iniguez Landin Surgical Hospital Clinic, one of those denounced for burying biological wastes in the Holguin cemetery. (14ymedio)

Lucia, 72 years of age, often visits the family mausoleum which is located a few meters from the place where the hospitals bury their wastes. “It is a lack of respect that they do this because this is a sacred place for the dead to rest in peace,” this lady complains, and although she has not seen the journalistic report, she asserts: “I realized that something was going on when I arrived and this was full of miserable buzzards.”

The main complaint, however, lies in the fact that such a sensitive matter that involves ethical and epidemiological issues has still not been dealt with by the province’s official media. “It seems that they are waiting for something grave to happen, for someone to get sick or to protest because of this disrespect, before they put it in the press,” says Lucia.