The first 180 Cuban migrants covered by an agreement to help them reach the United States set off on the final stage of their odyssey after entering Mexican territory from Guatemala this Wednesday.

The 139 men and 41 women reached the southeastern Mexican state of Chiapas aboard four buses, guarded by the National Civil Police and the Guatemalan Office of Human Rights.

The Human Rights Ombudsman in the municipality of Coatepeque, Jose Maldonado, said that “the accompaniment and verification for twelve hours” through Guatemalan territory was carried out in the framework of a pilot program following the agreement with Costa Rica, El Salvador and Mexico to help Cubans on their way to the US.

The migrants were received on the premises of the National Institute of Migration (INM) located in Ciudad Hidalgo, a few yards from the border. In these offices, staff conducted the process by which the Cubans received a pass allowing them to travel through Mexico for 20 days by which time they should have made it to the United States. The measure is covered in Article 42 of the Immigration Law that permits foreigners to be authorized to enter the country for “humanitarian reasons.”

Also participating in the process were personnel from the National Commission of Human Rights (CNDH), the Red Cross and several non-government organizations that defend migrants.

On their arrival at the federal facility at the Rodolfo Robles border crossing at Ciudad Hidalgo, Chiapas, the travelers expressed their goal of reaching the United States to reunite with their families, as in the case of Olanis Diaz, a native of Havana, who will see her father in Miami, Florida, after a hard journey.

The Mexican press, which is covering the journey of the Cubans, printed several testimonies from the migrants who expressed their gratefulness to the country.

“What we want is to be on our way as soon as possible. We don’t want to stay in Mexico, not because we don’t like it, but because part of my family is waiting for me [in Miami]; my sister, my nephew, whom I haven’t seen [in] a long time,” one migrant told the newspaper  Milenio.

The newspaper also reflected the desperation suffered by the Cubans when they saw their path cut off in Costa Rica last November, when the migration crisis began. “I tell my compatriots left behind, don’t forget your dreams, and keep going,” said one of the newcomers to North America. 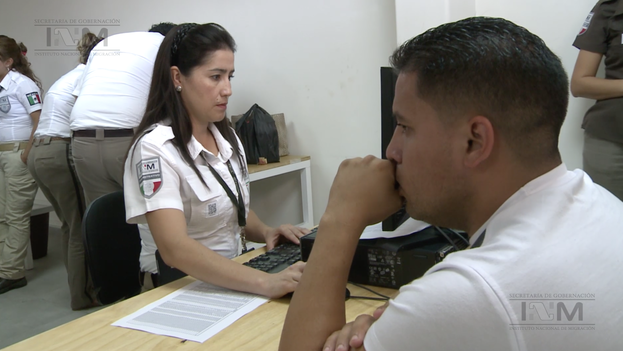 Images released by the Mexican Ministry of the Interior of the moment when Cubans arriving from Costa Rica via El Salvador and Guatemala are helped by the National Migration Institute in Chiapas. (INM / screenshot)

“We are grateful to the town of La Cruz and the Government of Costa Rica; thanks to them this dream has become possible,” another of the migrants, a young man of 27 who hopes to join his mother in Miami, told the Mexican newspaper  El Universal.

After the two hours required by the immigration process, Cubans left the offices and boarded four other buses, contracted for by the INM to take them the 27 miles from Ciudad Hidalgo to Tapachula, where they can buy plane or bus tickets to continue their journey to the north.

After being stranded for two months on Costa Rica’s border with Nicaragua amid a diplomatic dispute between the countries, the Cubans considered it “an achievement to arrive at Mexico’s southern border.”

Although they still do not know the steps they will have to take to continue their journey, they expect the rest of the journey to be organized by themselves and, on reaching the United States, expect benefits under the Cuban Adjustment Act.

Leonel Chirino, a 30-year-old baseball player, who arrived on the first bus, sent a message of “peace” to the more than 7,000 if their compatriots who are still in Costa Rica, from where the first group left Tuesday night by air to El Salvador, and from there by land through Guatemala and then Mexico.

The journey from Costa Rica to Mexican territory was coordinated by the International Organization for Migration (IOM).

The Costa Rican Foreign Minister congratulated El Salvador, Guatemala and Mexico for the flexibility they showed and added that they will continue working “very hard on behalf of all Cuban migrants who remain in the country.”

“Our opinion, which will have to be taken into account by other countries, is that this process has met all expectations. People have arrived safely, healthy, happy and on time. Everything has gone very well and we hope that the region will say the same,” he said at a news conference.

This coming January 18, a technical meeting is scheduled in Guatemala, which will be attended by representatives of Central American governments, to assess the first transfer of migrants.