A Havanan – one of those who doesn’t usually use the letter “R”* — an old pro-American joke tells us, is walking along the Malecon with his young son. Pointing to the immense blue of the ocean, the boy asks his father, “Papa, and that, what is it?” And the man, with his Havana pronunciation, responds, “The evil, my son, the evil.”* Some yards further on and a few minutes later, the boy returns to the fray, “And what is on the other side of that?” To which the man answers, “The good, my son, the good.”

Just across from the Malecon, where the waves remain an impassive witness to what happens in Havana, the American flag will be hoisted at the recently inaugurated United States embassy. But the sea did not want to be distant from the diplomatic chores and offered up to Havanans a symbolic gift: fish in the ration market. 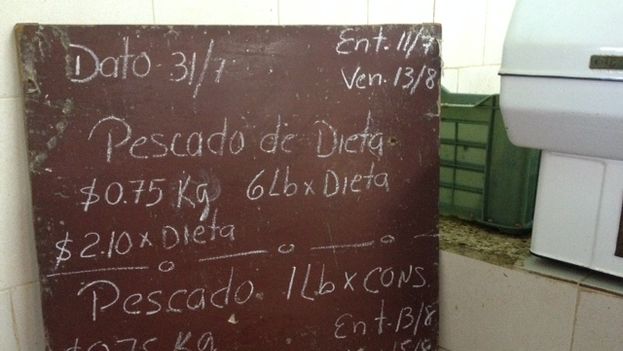 The funny thing is that the last time the buctcher shops in this coastal city were full of scales was, no more nor less, the day before December 17 of last year, when Barack Obama and Raul Castro announced that both countries was reestablish relations.

Surely, the Havana newspaper Tribuna, would publish the schedule for the sale of the marine product in every municipality. In the lines the same usual scenes repeat themselves and the joy of the poor will endure the little that always makes it to the quote of the ration book.

Fish, the sea, the flags, old whimsical symbols that invite us to a different reading, almost prescient, of reality.

*Translator’s note: The joke relies on replacing the letter R with the letter L. “Mar” is “sea” and “mal” is “bad” or “evil.”