My grandchildren will ask, “Were you there, grandma?” The answer will be barely a monosyllable accompanied by a smile. “Yes,” I will tell them, although at the moment the flag of the United States was raised over its embassy in Havana I was gathering opinions for a story, or connected to some Internet access point. “I was there,” I will repeat.

The fact of living in Cuba on August 14 makes the more than 11 million of us participants in a historic event that transcends the raising of an insignia to the top of a flagpole. We are all here, in the epicenter of what is happening.

For my generation, as for so many other Cubans, it is the end of one stage. It does not mean that starting tomorrow everything we have dreamed of will be realized, nor that freedom will break out by the grace of a piece of cloth waving on the Malecón. Now comes the most difficult part. However, it will be that kind of uphill climb in which we cannot blame our failures on our neighbor to the north. It is the beginning of the stage of absorbing who we are, and recognizing why we have only made it this far. 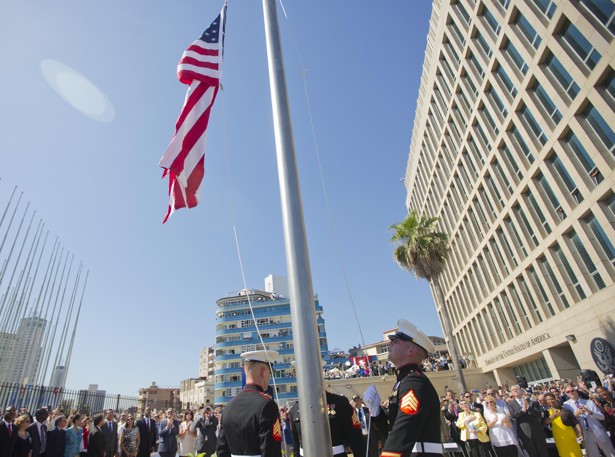 The official propaganda will run out of epithets. This has already been happening since the December 17 announcement of the reestablishment of relations between Washington and Havana took all of us by surprise. That equation, repeated so many times, of not permitting an internal dissidence or the existence of other parties because Uncle Sam was waiting for a sign of weakness to pounce on the island, is increasingly unsustainable.

Now, the ideologues of continuity warn that “the war against imperialism” will become more subtle, the methods more sophisticated … but slogans do not understand nuances. “Are they the enemy, or aren’t they?” ask all those who, with the simple logic of reality, experienced a childhood and youth marked by constant paranoia toward that country on the other side of the Straits of Florida.

Now that an official Cuban delegation has shared the U.S. embassy-opening ceremony with U.S. Secretary of State John Kerry, there is a family photo that they can no longer deny or minimize. There we saw those who until recently called us to the trenches, now shaking hands with their opponent and explaining the change as a new era.

And it is good that this is so, because these political pragmatists can no longer turn around and tell us otherwise. We have caught them respecting and allowing entrance to the Stars and Stripes.

The opposition must also understand that we are living in new times—moments of reaching out to the people, and helping them to see that there is a country after the dictatorship and that they can be the voice of millions who suffer every day economic hardship, lack of freedom, police harassment, and lack of expectations.

The authoritarianism expressed in warlordism, not wanting to speak with those who are different, or snubbing the other for not thinking like they do, are just other ways of reproducing the Castro regime.

“Are they the enemy, or aren’t they?” ask all those who experienced a youth marked by constant paranoia toward that country on the other side of the Straits of Florida.

A conflict of eras is unfolding in Cuba—a collision between two countries: one that has been stranded in the middle of the 20th century, and one that is pushing the other to move forward. They are two islands that clash, but it needs to happen. We know, by the laws of biology and of Kronos, which will prevail. But right now they are in full collision and dragging all of us between the opposing forces.

This Friday’s front-page of the newspaper Granma shows this conflict with a past that doesn’t want to stop playing a starring role in our present—a past tense of military uniforms, guerrillas, bravado, and political tantrums that refuses to give way to a modern and plural country.

When one scrutinizes Friday’s edition of the official publication of the Cuban Communist Party, it is easy to detect how a country that is unraveling clings to its past, trying not to make room for the country to come.

In this future Cuba, which is just around the corner, some restless grandchildren will ask me about one day lost in the intense summer of 2015. With a smile, I will be able to tell them, “I was there, I lived it … because I understood the point of inflection that it signified.”