The long line snakes outside the bookstore under the scorching August sun. Most are women with children. “They’re selling the thick notebooks,” announces an elderly lady to someone asking who is last in line*. The race is on to buy school supplies, such as backpacks and lunchboxes. However, some have better starts than others.

Daniela visited the aquarium, went to the beach, and ran around in the park near her house during her summer vacation. But now, as the days of rest are running out, her mother has embarked on a marathon run from store to store trying to find everything from colored pencils to a water bottle. Daniela wants to start the first day of school with “nice and pretty things,” which will hardly be cheap.

With 6,827 elementary and 1,766 middle schools throughout the country, the authorities of the Cuban Ministry of Education are giving assurances that school supplies will be guaranteed for the more than 1,500,000 students starting the 2015-2016 school year. Still, students and parents complain about the poor quality of the supplies, and the limited quantities distributed.

“My daughter can’t use an eraser because it leaves a hole in the paper,” said a mother about the notebooks handed out in schools. The woman was waiting to shop outside of La Época department store in Central Havana. Illegal vendors in the vicinity of department stores sell notebooks with colorful covers, and ruled paper for one CUC.

Daniela is lucky. She has an aunt living in Miami who bought her a backpack online.

In homes with school age children, the same scenario is being repeated over and over again as kids line up their precious pencils, protractors, and erasers on their beds or on the dinner table. Some families have already found backpacks, the source of many a headache given the high prices and flimsiness of those for sale in the government’s network of retail stores.

Daniela is lucky. She has an aunt living in Miami who bought her a backpack online. Her family received a phone call from the Plaza de Carlos III shopping center informing them there was a school supply purchase waiting for them there. The émigré relative also threw in a box of colored pencils. In Cuba, Daniela’s mother – an engineer who graduated a decade ago – would have had to work three days to pay for those pencils.

However, the online purchase hasn’t solved all the problems. Daniela’s family will spend a whole week searching for all the supplies she still needs. Her grandmother, who owns a car, will be going to “La Cuevita,”* a popular yet illegal market where small and medium size school uniforms are sold, although these same sizes are in short supply at government-run stores. Daniel’s father’s mission is to find her shoes, while her mother is in charge of finding a pencil sharpener and a compass for geometry class. 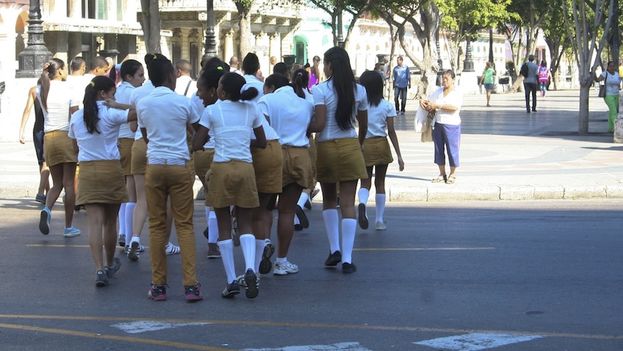 Since shortages have worsened in the last few weeks, Daniela’s family’s task will take a few days. “Every store is empty,” protested a grandmother of twins who will be starting first grade in September as she visited La Moderna Poesía bookstore. “An eraser here costs me at least 50 cents in CUC, but that’s my whole pension for one day,” she added.

Fashion also affects the predilection for specific school supplies. “My daughter wants a Monster High backpack,” explains a desperate mother who last Tuesday visited all the shops on Monte Street. The Monster High fashion doll and video franchise has become all the rage among Cuban children, putting their parents into a bind, pressured to do the impossible to get a hold of one of the brand’s items.

The same scenario – but with even more challenges – plays out in cities and small towns outside Havana Province. Long lines to buy school uniforms have become part of the urban landscape every month of August in the city of Pinar del Río. Still, unauthorized vendors manage to outwit the police by selling pencils, quality notebooks, and book covers made from recycled x-ray film.

Unauthorized vendors manage to outwit the police by selling pencils, quality notebooks, and book covers made from recycled x-ray film.

The Ministry of Education turns a blind eye to all of this. A couple of weeks ago, Marisol Bravo Salvador, the Ministry’s director for the Vueltabajo Region of Pinar del Río Province affirmed that her district “has all the necessary resources, like notebooks, pencils, and teaching modules that guarantee a year for optimal learning.”

The race to get all necessary school supplies is in full swing, but surely many children will enjoy nothing new when the schools year begins. These kids will probably become the targets of the snooty stares of their classmates, who – right in front of their eyes – will be showing off their lunch boxes that keep soda cold until afternoon recess, as well as their strawberry-scented erasers.

When the first morning school bell rings in September, there will be children lining up for class with eye-catching backpacks sporting smiling Disney princesses, carrying notebooks purchased by émigré relatives. Others will recycle part of what they used last school year, or they will just wait for whatever the teacher gives out.

Translator’s Notes: * Cubans join a line by asking, “who’s last,” and then they are free to cluster, wander around, leave and come back etc., without losing their place in line. **Literally “The Little Cave.” In popular Cuban parlance the term is applied to discrete locales of unlawful activity, much like U.S. Prohibition-era speakeasies.