In Old Havana, the residents of a tenement on Compostela Street, between Luz and Acosta, across from the Belen Convent, no longer want to risk their lives under the roof of their dwelling. The façade is no longer a place where sports passions are written, now the residents have turned it into their Wailing Wall with an irrevocable demand: “We want decent housing.”

The reason they have taken their beds into the street is the deterioration of the building, which threatens to fall down on their heads. As of last Friday, the residents of the place made the decision to sleep in the entryway, which seems more secure, with their more precious treasures: a TV, a refrigerator, three mattresses and a table.

Since we’ve come out of there they are starting to listen to us,” says a woman of around 50, referring to the local authorities. With an unconvincing optimism, the woman says, “This Monday they will give us an answer, they’ve promised.” However, she adds with determination, “We do not want to go to a shelter and spend 15 or 20 years there waiting for the day they give us a decent house.” 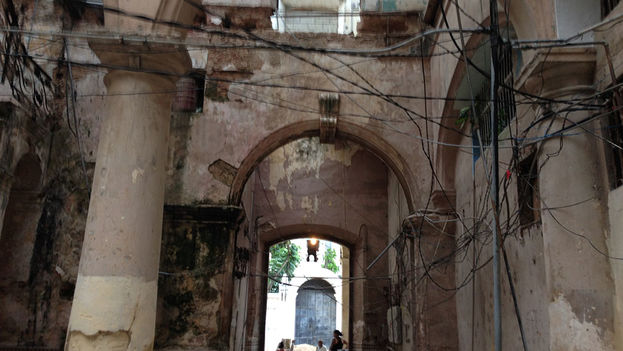 The residents of the Compostela Street no longer want to continue to risk their lives under the roof of the dwelling. (14ymedio)

In November of last year the official press published the alarming number of families in need of homes: 33,889 (132,699 people). Many of them have lived for two decades in shelters for victims of uninhabitable housing. According to the census, 60% of the 3.9 million housing units on the island are in poor condition.