The writer Angel Santiesteban was released Thursday after appearing before the Provincial Court of Havana. The journalist had been  arrested yesterday afternoon, accused by his ex-wife of the supposed crime of “violation of domicile,” the same charge he was convicted of 2012.

“We were going to revoke your probation, but you are behaving well and so we are not going to revoke it,” the judges said, as confirmed by the writer to this newspaper. He said the trial never happened because the cause was withdrawn. Santiesteban said that they learned that “a paper signed by his ex-wife” withdrew the complaint for the supposed crime. After what happened this morning, the activist remains on parole, as he has been since last July.

A few yards from the Havana Capitol, a dozen Ladies in White, activists and members of the Patriotic Union of Cuba (UNPACU) gathered from the early hours and were able to witness the moment Santiesteban, handcuffed, escorted by two policemen arrived and was led into the Fifth Chamber where he would be tried. Among the opponents was Berta Soler, leader of the Ladies in White. 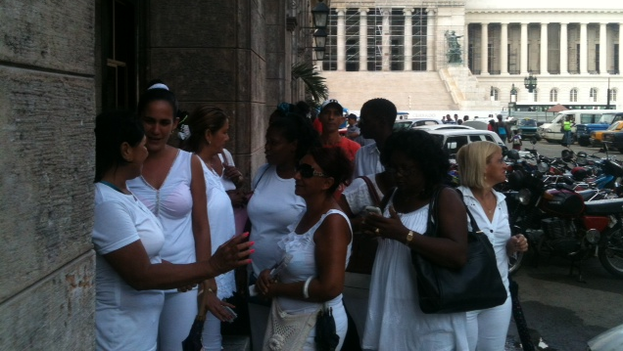 Ladies in White outside the provincial court. (Angel Moya)

In the morning, the artist Danilo Maldonado, known as “El Sexto” (The Sixth), took toiletries for the writer to the police station in Zapata and C where he was being held, but he had been transferred to the court, although several sources said he was able to make a phone call before leaving.