After forty years together, Roberto’s partner died this year from a respiratory condition, but he will not collect a penny of the widow’s pension because in Cuba same-sex unions are not legally recognized or protected. Situations like this are in the sights of several independent organizations that demand rights for the LGBTI community, and that have just launched a campaign for marriage equality.

“We also love,” is the slogan under which different civil society groups will demand a legal framework that allows unions between people of the same sex, and equality of rights between homosexuals and heterosexuals. The initiative was presented to the press this Tuesday and will go public on the first of December.

Among the groups involved in the project is Corriente Martiana (Current [José] Martí), which is working on this project in coordination with the Cuban Foundation for LGBTI Rights, led by Nelson Gandulla in Cienfuegos province, and which shares the lead in the new campaign with the Integration Project of the Gay Community in Cuba led by Navit Fernandez in Havana.

Other entities not directly related to the LGTBI environment have begun to get involved in the project after being invited to show solidarity, such as the Candidates for Change project.

The organizers have developed several initiatives. including the presentation of a written request to the People’s Power delegates during weekly office hours they have with their constituents. Each of the activists should ask for a receipt that gives evidence of the request and that will accompany the collective petition that is finally delivered. 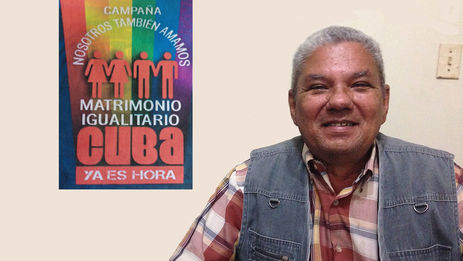 Moises Leonardo presents the campaign for marriage equality in Cuba

The collective petition will be delivered to the National Center for Sex Education (CENESEX) and the Cuban Parliament, Moises Leonardo, spokesperson for the Corriente Martiana, explained to  14ymedio.

“First we will present it in municipal assemblies, then in the provinces and finally to the National Assembly of People’s Power. We will seek the support of artists and personalities of our culture, as well as a number of independent civil society organizations that want to join us. The campaign starts the first of December and will last six months, but even when that date has passed it will be ongoing.”

This campaign seeks to protect a couple’s rights, such as inheritance or insurance payments with respect to accidents at work, as well as obtaining legal protection for the distribution of property in the case of a separation.

“The intention is to climb one more step in the defense of human rights for a sector of the population. Practice tells us that the LGBTI community is very united in defense of their rights, and that encourages us a lot,” added Leonardo.