This weekend the serious epidemiological situation in the city of Holguin forced it to suspend the first celebration of  Holguin Nights for the month of August. The increase of dengue fever cases has sparked alarm among local authorities who are asking people to take extreme measures to avoid contagion.

The popular festivities were cancelled after the kiosks selling food and drinks on the Avenida de los Libertadores had already been constructed. The central street is the main stage for this festival, which mixes music, food and the sale of household products.

The Provincial Health Department has issued a report that explains that between 100 and 150 foci of Aedes aegypti are identified daily in the area. The figure has caused an increased rate of infestation of the municipality of Holguin, which stands at 3.3, versus the 0.05 that, under normal conditions, is common the area.

The worrying situation could affect the celebration of the Holguin Carnivals, scheduled for August 20-23, and international tourism. The province occupies third place in the national arrival of foreign visitors.

Several hospitals, such as the Lucia Iniguez Landin Clinical Surgical Teaching Hospital, the Octavio de la Concepcion y de la Pedraja Pediatric Hospital and the nursing subsidiary of the provincial capital, have been turned into places of isolation for infected patients. In the past two weeks 611 fever patients with nonspecific symptoms were tested, 258 of which were confirmed cases of dengue fever. 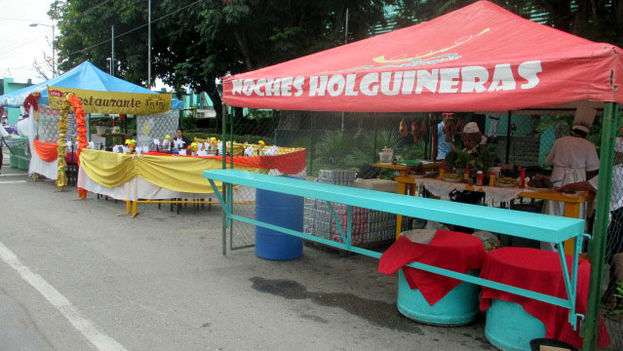 The event ‘Holguin nights’ had to be suspended after the kiosks were already assembled. (Fernando Donate / 14ymedio)

The health areas where the most cases were reported, between confirmed and probable, are Mario Gutierrez with 1,052; Maximo Gomez, with 1,018, and Reparto Alex Urquiola, joined by Pedro del Toro, which now has more than 600 patients, according to what Dr. Elizabeth Segura Sierra, director of public health in the territory, reported to the media.

Sunday 450 workers were mobilized in the rest of the province to support the work of control and fumigation for the entire month of August.