About 10 miles from the border with Nicaragua is the canton of La Cruz in the province of Guanacaste, in Costa Rica. Peñas Blancas is there, the most important outpost in the north and the place where serious incidents between Cuban migrants and Nicaraguan police have taken place.

At present, a thousand Cubans are distributed among several shelters, some in a church, others in a school and others who do not want to get too far away from the border post spend the night around the customs post. This weekend the whole area is buzzing with people coming and going, among them the migrants and volunteers from humanitarian organizations.

At the customs post there are blankets everywhere, vessels for storing water and clothes hanging on clotheslines, giving the place the look of a tenement in Old Havana. Jorge shares with 60 fellow travelers the floor of a place where they have settled with makeshift mattresses, and continues to wait for Nicaragua to allow them to continue on their way.

This loquacious Cuban with stubborn dreams completed an official mission as a healthcare worker in Ecuador. He didn’t want his picture taken or his name given to this newspaper, for fear of not being able to return to Cuba, but he relates the long journey that has brought him to Costa Rica.

“The goal of many of us was to complete our mission in Ecuador and in that time to make contacts to return to Quito or other cities with a contract to work privately,” Jorge explained. However, “at the request of the Cuban government, the Ecuadorian authorities ended the ability of Cubans to be placed on the professional register.” He emphasizes, “The Cuban government made this happen.”

Jorge notes with irritation, “I never thought of traveling to the United States.” Summing up his initial plans, he says, “I wanted to be a professional in Ecuador, where I could earn $2,000 a month. Why would I go to the United States to work in construction?”

“They forced me to do this because they shut down the path I was on,” the man says. Unable to register as a health professional left him the option of “cleaning floors in a hotel.” Of the $3,000 salary declared on the contract of his official mission, the Cuban government only paid Jorge $700. All these absurdities led him to undertake the journey to the United States, he says.

On a table outdoors, Beatriz is busy filling in the entrance forms for a group recently arrived at the La Cruz camp. She is a Cuban working with some church or NGO that is there helping Cubans, particularly because she pronounces all the letters of words.* 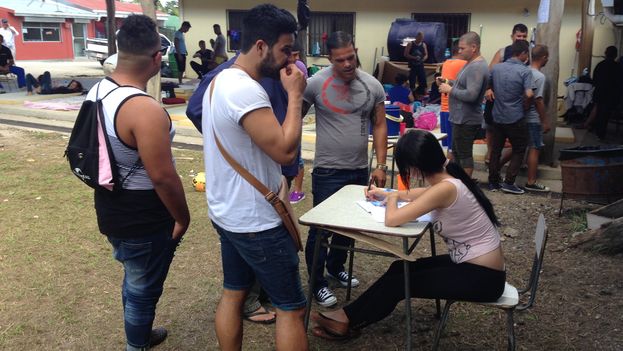 “This you see here is the dining room,” she says. “At any time of day or night people come here from the border and end up in a camp with better living conditions.” The young woman detailed that those in shelters in the town of La Cruz eat breakfast and lunch there. The costs are borne by the community, the church and other organizations, “that have made this possible and that support us in every way they can.”

Before leaving Cuba, Beatriz worked in the restaurant industry in Camagüey and has come to Costa Rica with her husband. They only arrived in Ecuador on November 1st with the intention to begin their journey north on the 10th, but moved it up to the 3rd. “When we got here they had already closed the border.”

She moves with purpose and has an authority that makes newcomers ask her for advice as if she were a specialist in immigration procedures. Only 23, she said she was optimistic that there would soon be a solution for the almost 4,000 “rafters on foot” stranded in Central America. The conviction that she will achieve her dream is based, above all, on her youth, “I have more future than past,” she repeats with certainty.

In the line to be added to “Beatriz’s list,” is Oneiqui Castro, who worked as a butcher in Ciego de Avila. At the registration table he shows his Cuban passport and a Florida state driver’s license in his name. “Two years ago I lived in the United States for 8 months. It went well for me, but I returned to Cuba for matters of the heart. Love played a dirty trick on me and now I’m back,” he says.

However, not everyone is there to reach the United States. The artist Tania Bruguera spent several days accompanying the Cubans at the border and has helped them create a Facebook page under the slogan “ Let the Cubans pass.” Open just 72 hours, the site has already been visited 108,700 times.

Tania remains with the “rebel group,” those who do not want to stay in the shelters but prefer to remain as close as possible to the Nicaraguan border. They surround the artist, seeming to feel inspired by her, because of her peaceful yet disobedient vocation. Despite the fact that the official Cuban media never mentioned one word of  Bruguera’s performance last December, the majority of those from the island know about it.

Tamara Roman responds to this paper with a certain air of desperation. She talks as if her life depended on her words. “The greatest fear that we have is that December 15 will arrive, when all the institutions start to get into Christmas, and we will have to stay here until January when the whole thing will start again.” Her fears reach beyond the border: “My greatest fear is that when we get to Mexico they will deport us to Cuba,” she says with anguish. 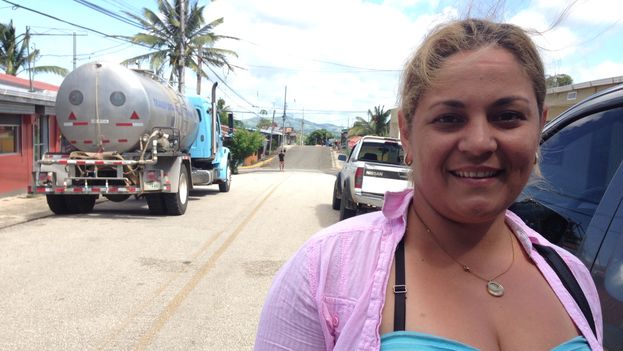 A fear also shared by Katiuska Muniz, from Santa Cruz del Sur in Camagüey. The woman worked at the Psychiatric Hospital in the provincial capital and left her two children, ages 17 and 9, with her mother. She served on an official mission in Venezuela where she was in charge of a pharmacy, but only lasted in the post a little more than two weeks. “I’m a professional and I want to go to America to work,” she explains. “And if it can’t be there, then to any country where my children can have a future.”

She is silent for a long time and looks like she is going to cry, but takes a breath and says, “I would like to thank all the people of Costa Rica, the president and the foreign minister and the entire humanitarian solidarity they are providing to us. We are not hungry or in need. They give us support and protection, the people on the street do not repudiate us but rather they support us; they talk with us, laugh with us, and they make us feel like family.” Her sentiment is shared by all.

As she speaks, another group of migrants has arrived, some laden with backpacks and with sweaty dirt-covered faces. Beatriz begins to take their names and the evening falls on La Cruz.

*Translator’s note: Spoken Cuban Spanish is notably characterized by the dropping of the sounds of many letters.