The traditional celebration offered by the US Interests Section in Havana, on the anniversary of the Independence of the United States, had on this occasion a special connotation for being the first one to take place following the announcement of restoration of relations between that country and Cuba, and the last one before the reopening of the US embassy in Havana, scheduled for July 20 th.

A large turnout of members of the independent civil society participated in the festivities on Thursday July 2 nd, sharing the space with known artists, other cultural figures, scholars, and representatives of the Catholic Church, led by Cardinal Jaime Ortega. As usual, there were numerous officials of the diplomatic corps present at the event.

After listening to the national anthems of Cuba and the US, Mr. Jeffrey De Laurentis, Chief of the US Interests Section, delivered a brief speech by referring to the importance of the date and the events that are taking place at this new stage of dialogue between the two governments, while expressing his hopes that soon the ties between our two countries will deepen and consolidate.

The gathering was enlivened by American entertainers, who performed traditional Cuban and American music.

The simultaneous presence of members of independent civil society and of well-known personalities of the national culture has been evolving into a healthy trend that has been implemented in celebrations organized by the Interests Section, thus creating room for tolerance and mutual respect in a relaxed atmosphere, though, overall, certain distrust persists on both sides.

Perhaps for the 240th US Independence Day anniversary we will have the unusual image of the bird on its structure with the marble columns, paradoxically close to the Anti-Imperialist Tribunal

Of course, most of the discussions were focused on the new relations between Cuba and its neighbor to the north, the imminent opening of the US embassy, and frequent speculations about what the current dialogue and “normalization” process, initiated last December, might mean for the lives of Cubans in the medium term. An atmosphere of cautious optimism prevailed, though those who are more knowledgeable on policy issues recognize that the current situation within Cuba is complex and delicate.

White roses adorned the surroundings, while the crowd of invited guests was presented with fans with the US flag on them, to mitigate the heat that prevailed in the gardens of the residence of the head of the US Interests Section, where the reception was held . 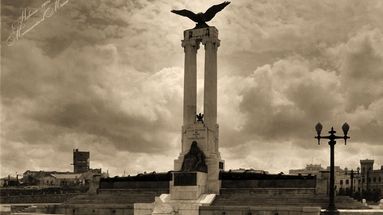 Monument to the Maine in Havana before the Revolution

There, at the back of the beautiful park, the bold eagle, symbol of the “enemy” nation, stands proud, and now extends an olive branch to Cubans. This is the first bronze sculpture crowning the monument to the victims of the USS Maine. The bronze eagle was struck down by the hurricane that hit Havana in 1926; the sculpture which replaced it fell under the onslaught of the other major hurricane, the 1959 revolution, and now head of the eagle can be found on the wall of the conference room at the Cuban Interests Section building, while the Historian for the City of Havana treasures the rest of the body. 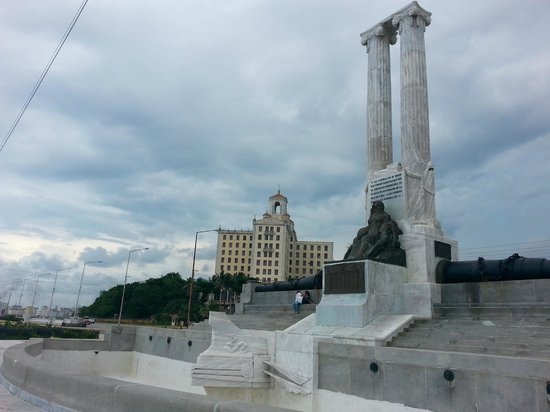 Monument to the Maine in Havana today

It has been said that only when Cuba and the United States rekindle the path of harmony the two parts of the bald eagle would be reassembled and placed anew on its pedestal, by the sea at the Malecón, peering at the horizon. If this prophecy is fulfilled, perhaps for the 240 th Independence Day anniversary we will have the unusual image of the bird on its structure with the marble columns, paradoxically close to the  Tribunal Anti-Imperialista and the  Monte de las Banderas.