In the middle of Los Sitios neighborhood, in the heart of Central Havana, the Jesuits have a project focusing on the neediest sectors of the population. The elegant façade of the place contrasts with the humble homes surrounding it, where so many families face the drama of an alcoholic father, a daughter working as a prostitute or a teenager in prison. The Loyola Center programs are for them, and for those who face these problems daily.

This project of the Society of Jesus, which has other sites in Cienfuegos, Camagüey and Santiago de Cuba, was inaugurated in January 2012 and since then has not stopped growing. In the mural at the entrance of the imposing building, there are announcements for dance classes for girls, support for single mothers, and computer and language courses.

Of particular note is the “Basic Course for small business management” that began its 13 th session this September. Of the 120 people who applied for admission, just over 80 came on the first day and now there are fewer than 50. Both students and teachers believe that this course is a success.

Darien Garcia who directs the courses is a graduate in accounting, age 38, with the rare virtue of believing in what he does in a country where many people of his generation dream of emigrating, or simply stand around on a corner to pass the time. This young man spent eight years teaching at the University of Havana and has now been at the Center for two and a half years.

The teacher explains why more than half of those enrolled do not attend the course. “This drop off is because, when they see that we don’t teach any get rich quick tricks here, they leave the course.”

“Of all the current students, only 15% have businesses, another 10% are on the verge of starting something, and the rest are State workers who want to move to the private sector, single mothers who are housewives, and others who are about to be.”

The basic course lasts two-and-a-half months and is divided into phases: the introduction, which includes vision, mission, analysis of the environment, business objectives and target market; a second phase with all the tools of the process: accounting, finance, costs and management of resources; and a third phase with legal aspects, taxes and more emphasis on business ethics. The latter class is given by priests. In addition, every Wednesday at 7:30 pm there are lectures on various topics with free access.

“We take advantage of the opportunity to teach values in the solidarity economy, like how to make your business grow without crushing others, which is very complex. We have students with professional training, some with university degrees, but also some with warped ethics, which we try to address. It is very curious how some, when they confront a problem, the first thing that comes to mind is to apply a fraudulent solution, whether to resolve things ‘under the table’ or to deceive the consumer. Here we pass on business ethics, an economic system of sustainable development, that respects people and the environment.”

Adapting to current circumstances, this course also teaches how to manage non-agricultural cooperatives and offers thematic courses such administration and working in teams. For the coming year a course is planned on the principles of food service, another on financial processes for private businesses in Cuba and the second round of “managing cooperatives,” which includes a topic very popular in State enterprises: internal control.

“In Cuba we have the idea that internal control is a method to keep employees from stealing,” explains Darien Garcia. “But, in reality, its objective is to improve a business, to make it more efficient and effective.” In the case of cooperatives, it is not mandatory from a legal point of view, but it is essential for the health of the business.

In the previous 12 terms, with more than three courses per year, more than 240 people have graduated. In 2016, there is a proposal to measure the impact of the project on a society slowly evolving, changing paradigms and lifestyles.

One of the most interesting dynamics happening is that at a Center that teaches how to run a business, students are given tools based on knowledge management and then they have to confront the known limitations that still confront entrepreneurs. 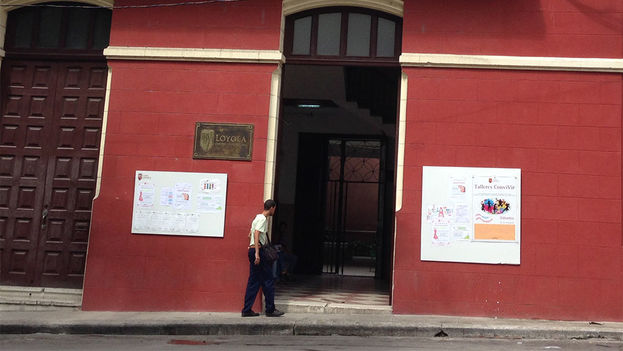 The Loyola Center in the neighborhood of El Sitios, in the heart of Central Havana. (14ymedio)

“We are based on the principles of economic solidarity and sustainability, that don’t limit the accumulation of wealth, but that make the students understand that to achieve their personal well-being they have to also achieve that of those around them. We work only within what is legal, understanding that drugs, prostitution, weapons, are all illegal. We confront the problems of many who believe that they know everything, and limit themselves to copying what has been successful. Some go to the extreme of wanting to copy the successful, and if someone puts the sofa in that position, they also want to put it the same way,” explains professor Garcia.

Across the country there are now 440 registered non-agricultural cooperatives, of which 400 are operating. On the other hand, the law only allows for 211 self-employment occupations, some of which are described so generically they can encompass any work, while others are defined so rigidly that they leave little space. All of this is talked about and discussed in the Loyola Center classrooms and hallways, where the embryo of the new Cuban middle class may be being formed.

“Today, there are businesses, including cooperatives that even though they don’t accumulate property, they accumulate wealth, for example in construction,” explains Darien Garcia. “What we propose as a social project of the Jesuits in Cuba is not to strengthen those who have the most fruitful businesses and the higher economic and cultural levels, but to reach those businesses in more difficult conditions, those that are emerging. Our social mission is to be where the most deficient sectors of society are.”