Cuban graffiti  El Sexto (The Sixth), who spent ten months in prison for having written the names of Fidel and Raul on two live pigs that he intended to release in Havana, told EFE that Cuba will change only when “people wake up inside.”

The week that he opens his first exhibition in the United States, sponsored by the London’s Pollock Gallery and the Human Rights Foundation of America, Danilo Maldonado is amazed to be living a “dream,” but there are also moments when he thinks about the consequences of his efforts.

In Miami’s Market Gallery,  El Sexto, (a nickname that refers “The Cuban Five,” the group of Cuban agents who served sentences in the United States for espionage and who are considered heroes by Raul Castro’s government), will present his artworks created in the Netherlands, Cuba and the United States, including 40 drawings done in prison.

The title of the exposition is  Pork, an animal revered for its meat by Cubans and one that unwittingly led this graffiti artist to prison. “Blame George Orwell,” he jokes.

Maldonado, 32, tried to do a piece of performance art in Cuba based on  Animal Farm, Orwell’s satire about Stalinism in which the animals rise up against the farmer under the leadership of the pigs, who end up perverting the new rules and imposing their own power.

On Christmas of 2014 he was arrested in Havana before he was able to release two pigs, painted green and with the names Raul and Fidel written on their hides; he remained in prison without charges for ten months. 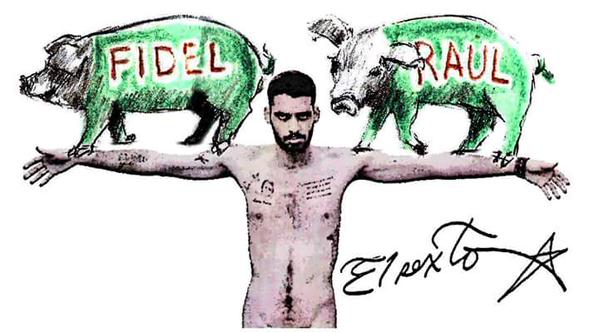 While behind bars he drew and wrote a kind of diary, when he was not in isolation, undertook a hunger strike, and was declared a prisoner of conscience by Amnesty International. He also won the 2015 Vaclav Havel International Prize for Creative Dissidence, awarded by the Human Rights Foundation.

There may also be some pork there, says this mysterious artist, who believes that “art can do everything.”

For this reason he does not forgive many Cuban artists who, in his view, have been, and are, accomplices of the Castro regime. “That is the art of lies,” he says, about those who “are not capable of questioning the system.”

“Much of the blame for this system that has lasted so long is on the artists,” he says, convinced that they have helped to legitimize Fidel Castro, leader of the Revolution, and his brother Raul, today president of Cuba, and they have also helped to deform the minds of Cubans.

But the blame is not entirely on the “hostages,” he says, referring to Cubans. There are also other governments in the Americas and Europe who have contributed to perpetuating totalitarianism in Cuba, he asserts.

When El Sexto was able to leave Cuba, thanks to a grant from  Justice and Peace Netherlands, and came to know the world “outside,” he felt he had been “robbed” his whole life and that “an experiment” had been carried out on him and on Cubans in general.

However, he does not plan to leave Cuba and entirely forget about it, like others. “Of course (I will return), I was born there for a reason,” he says.

He has a daughter in Cuba, Renata Maria who is two-and-a-half, and he told EFE that everything he does “is to let her name rise higher.”

An anonymous source has placed to stickers made by El Sexto next to the gallery entrance where he will have his debut as an exhibitor: one is a portrait of Renata with a chick on her head and the word “despiertica” (little awake one), and the other a self-portrait with a rooster on his own head and the word “awake.” 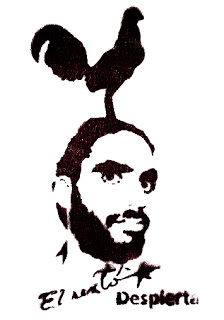 Cubans “waking up within” is, for El Sexto, the only way to change Cuba, apart from, clearly, “the [Castro] government stepping down,” a government that “has spent 50 years taking things from the people and exercising power by force.”

Danilo Maldonado admits that when he was younger he thought “about trying to escape,” but then he came to understand his role as an artist. When he was younger than now, painting the walls of Havana made him feel good, but he looked at art as a hobby, like an affair with a woman. At age 25, after having done everything, including a job as a computer teacher, he decided to turn completely to art. “Today I am happily married,” he says.