“New movies, lots of ice cream, and a good pool,” is how a resident of Pinar del Río summarized his wishes for this school vacation. His second wish was granted at the local Coppélia ice cream shop, but his hometown has a sad record otherwise, counting only one open cinema, and no functioning pools.

Pinar del Río’s eleven pools are either dilapidated or are under some sort of renovation keeping them closed to the public. In spite of it being a particularly warm summer, with temperatures exceeding 97ºF, the people of Pinar del Río have to make do with fans in order to cool off a bit. Or they make do like Yoankys and Maykel, who use “a hose in the backyard” when the heat becomes unbearable. They used to able to take dives at the pool of the Pinar del Río Hotel after paying admission in CUC’s, but that option does not even exist anymore.

“This shows a lack of respect,” opined Yoaknys, who added that in the Galiano and Mijares Districts, adjacent to the Pedro Téllez Vocational School’s pool, the discontent is even greater. “People see the infrastructure is there, but we need the will to make it work.” That blue, waterless, and dilapidated rectangle is an eyesore for anyone who takes a peek at the school’s sports facilities.

“It would be a scandal if we had a pool full of water while we’re having such a hard time filling our water tanks.”

Orestes, a longtime neighborhood resident who works on a government pig farm, said he could care less if there is a pool or not, but “the kids are sweltering, and we don’t even have a lagoon with water.” This man, who has always lived in the area, recalled that “the only recreation around here used to be the Vocational School’s pool, but since they didn’t change the water, they had to close it.”

Mariela, a housewife who moved to the neighborhood only two years ago, blamed the empty pool on the drought. “It would be a scandal if we had a pool full of water while we’re having such a hard time filling our water tanks.” Pinar del Río Province is facing the lowest precipitation in half a century. Its reservoirs are at a little more than 30% of total capacity, and seven are at critically low levels. Mariela added: “We can’t waste water for recreation when we barely have enough to wash dishes or bathe.”

Jorge, the custodian in charge of the Vocational School’s grounds said that “(the Ministry of) Public Health ordered the pool closed because it was a mosquito breeding ground.” Together with the breakdown of pumping and water treatment systems, chlorine shortages are one of the causes that most often works against the safety of pool water throughout Cuba. 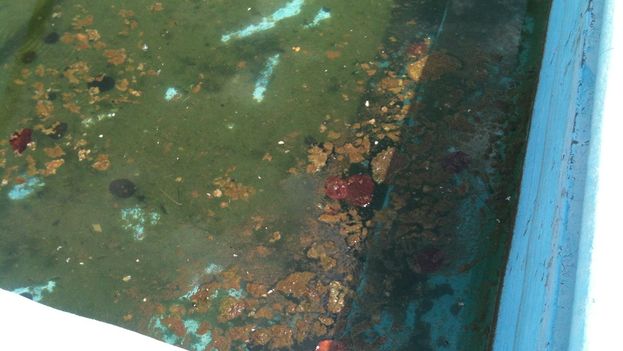 Bottom of the pool at the Ormani Arenado Sports School in Pinar del Río.

“This had turned into a health problem,” explained Mariela, who remembered that several “youngsters got sick from fungus, skin infections, and otitis in that place,” and said she was “relieved they drained the water, because it was a constant source of diseases.”

In her opinion, “people aren’t accustomed to pools. They don’t even shower before getting in, and they urinate or eat while in the water. And that’s not counting all those who in spite of having an infected wounds on their bodies, still dive in.”

“We want our children to learn how to swim, to play sports, and to spend their free time on wholesome recreation…but we have ten pools closed in this city!”

However, Antonio Vázquez, a staffer of the city’s Ministry of Education, refused to accept that closing the pools is the way to solve health problems. “We want our children to learn how to swim, to play sports, and to spend their free time on wholesome recreation…but we have ten pools closed in this city!” he exclaimed in frustration.

Mr. Vázquez explained that “pools in the city of Pinar del Río fall under the jurisdiction of several government entities.” According to this government employee, the Vocational School’s pool is run by the Education Ministry, “but it was ordered closed by Public Health, because with the drought, they weren’t able to change the water, and after a month, it was polluted.”

A waiter at the Pinar del Río Hotel explained to 14ymedio that the closure of their pool was due to remodeling, “but it’s going to end up looking very nice. We’re opening it on August 13th *, with a ten CUC admission, of which eight covers food and drinks.” The hotel employee stressed “they had to close it, because it was in a very bad sate, but now it’s going to be perfect. We felt bad for the public, but it had to be closed.”

Like a vanquished giant, the Olympic-size pool at the Nancy Uranga Physical Education College, is deserted and waterless. “We had to empty it,” recalled the college’s custodian “because youngsters would show up with alcohol and knives, and then things would get bad. The grounds are under police surveillance, but the problem did not go away.” The custodian then explained, “The problem with the diving pool is another story. That one is contaminated.” Its green water covered with a layer of litter confirmed the custodian’s words.

The Ministry of the Interior’s Villa Guamá ... is another one of the privileged locales enjoying the relief of a functioning and clean pool.

Far from there, weeds cover the entrance path to the Frederick Engels Vocational School, inaugurated by Fidel Castro. It has been almost five years since any students have been able to submerge themselves in its two pools, which were once its source of pride. “No one gives a hoot about this. They were ruined because of the lack of upkeep,” complained an employee. The pool at the Medical Sciences Department is in a similar state.

The Ormani Arenado Sports School has become the last hope for the desperate swimmer. However, two of the three pools have not been filled for months, and the Olympic-size pool overflows with a liquid covered by a green film that reeks terribly.

In contrast with these bleak scenarios, the Central Home of the Revolutionary Armed Forces, located on the Central Highway, at the outskirts of the city, showcases a well-maintained pool, but it is reserved for the members of the military. The Ministry of the Interior’s Villa Guamá, located on the 4th kilometer (2.5 mile) mark of the highway to Viñales, is another one of the privileged locales enjoying the relief of a functioning and clean pool.

“But those pools aren’t for the people,” protested a frustrated Yoansky, the young man who tries beating the heat by dousing himself with a hose in his backyard. “It’s as if they didn’t even exist.”

*Translator’s note: August 13 is Fidel Castro’s birthday and the day is often marked by “special” events such as this.